Special Show&Tell / It's a Tie

Special Show & Tell / And the Winners are...

Grandfather's Fox
by Isabelle Rollin
My first rug was inspired by my Mother who told me that her Father had designed and maybe even hooked a rug with a fox and flowers. Together, my Mom and I spent many precious moments trying to recreate this design.
This has a great deal of 'doing and undoing' as I was learning to hook. Thank you all for your advice and encouragement. Thanks Mommy.
The rug is 26-5/8"x38", wool cut no. 6.
Original design hooked with recycled material from blazers, skirts and shared wool.

Le Draveur/The Logger
The image of a happy man, working  his hard and dangerous trade, in the rageing wilderness of spring.
While I was hooking this rug, many stories were shared to me, souvenirs of people who had the chance to know one of these brave and proud men.
What a great recognition.
For the fabrication of this rug I used woolen shirts. Maybe one had belonged to an old logger!


Lumberjack's Snowshoes
By Jacques Lepage
Size: 56”X 30”
This rug was inspired by our snowshoes on a cold winter day. I used plaids in the background to give an effect of lumberjack's woolen coats that would be hanging in their shack.

Isabelle Rollin and Jacques Lepage, two members of our Guild and also a couple in real life, tied for the 1st Place Award at the 105th Edition of the Ormstown Fair, during the first Rug Hooking Show ever done! Certanly, Jacques could be a member of the "Rug Hooking Hall of Fame": He also won the 2nd place! Congratulations Isabelle and Jacques! We're very proud of you two! 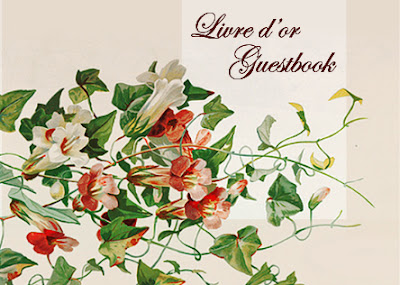 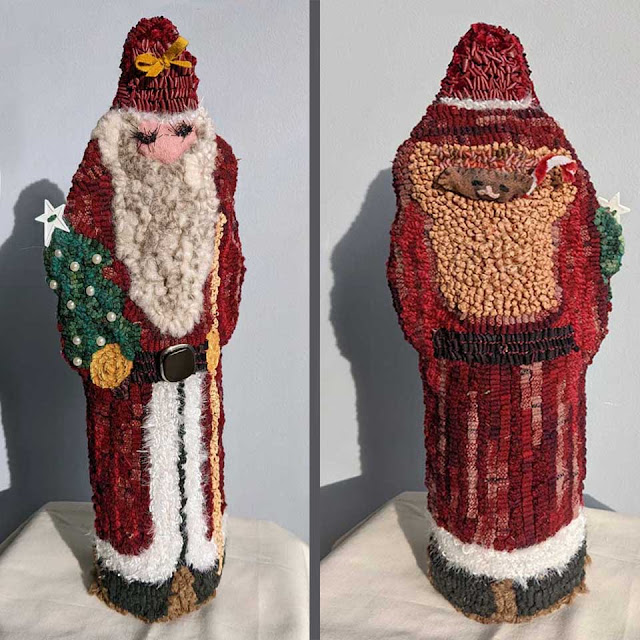 Special Show & Tell : Christmas!    The annual unveiling of our traditional holiday ornaments evokes Christmas cheer to our homes. This fabulous three-dimensional Victorian-style Santa brings back the magic of an old-fashioned Christmas. Old World Santa, a pattern by Janet Conners hooked by Candace Fradette Candace Fradette Old World Santa Pattern by Janet Conners Source: Rug Hooking Magazine November/December 2020 2021 13” x 5” x 3” diameter Hooked with stretch velvet, #6 wool strips, assorted wool yarns, raffia, vegan leather, fleece I saw this Old-World Santa in the November/ December 2020 issue of Rug Hooking magazine and I used this project with an Embellishing Techniques workshop with Parris House Wool Works. It was a really fun project. I used pearls and a star to decorate the tree which Santa is holding, added a buckle for his belt, a stuffed toy and candy cane so they stick out of his backpack, and even added some eyelashes and a bow! He is three-dimensional and fits over
Read more 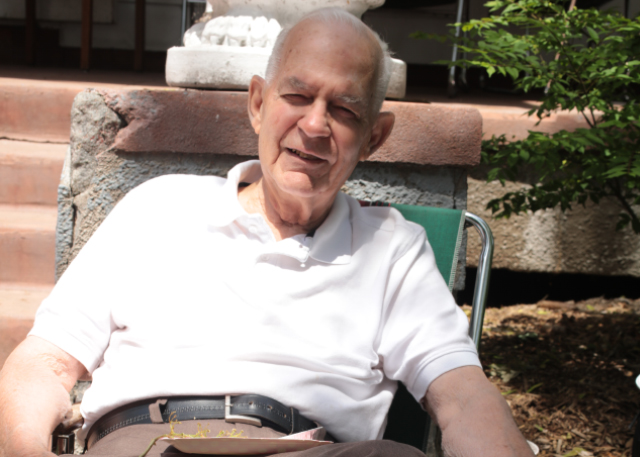 In Memory of Derek Morris     August 7, 1931 – March 1, 2022    Derek Morris at BHCG 2016 Picnic (Picture: BHCG Archives) .   It is with great sadness we heard of Derek Morris’s sudden passing. Husband of our guild’s founder Lois J. Morris, and also known as “Driver”, Derek contributed wholeheartedly throughout the years to the workings of the Guild. Not only did Derek drive Lois to weekly meetings, but he also assured the transport of rugs and rug hooking supplies for countless workshops given by Lois and to rug exhibitions and annual picnics at Centennial Hall. He even car-pooled some members to Hook-Ins at Olde Forge. By 2013, he had already logged over 100,000 kilometers! Derek was very proud of Lois whom he called “The Teacher”, her talents, and of the Guild she founded. For years, they opened their country home each summer to members for a picnic hook-in and Derek was most welcoming. At one of the annual Centennial Hall picnics, Derek delivered a moving tribute to the longstandin
Read more 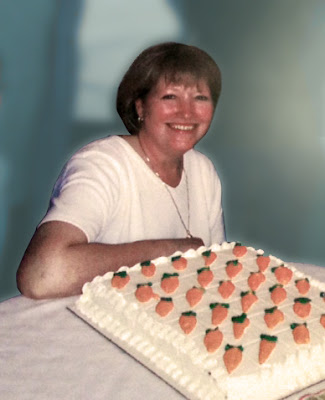 Remembering Linda Luce Morazain       1942 to March 29, 2021. Passed away at the age of 78 in Bathurst, New Brunswick.    Written by Maureen Rowe It was with sadness that we learned of Linda’s passing. She was an energetic, enthusiastic, gregarious member who loved to laugh. She joined the Guild in 1991 and, in April of the following year, she took on the role of Guild treasurer. In April 1993, she was vice-president. Like several of the BHCG members, she was also a member of the smaller group Track II which met in Valois. Everyone knew her to be a fabulous cook and she had the best recipe for lemon squares. Linda Luce Morazain (1942-2021) Linda's Birthday (Picture : Courtesy of Terry Ballantyne) Linda was always sunny, full of life and showed enthusiasm for her projects, whether it was for real estate (her occupation) or for rug hooking. She loved Centennial Hall and its sunny cozy ambiance and was always there early. She loved getting involved in setting up the Christmas banque
Read more 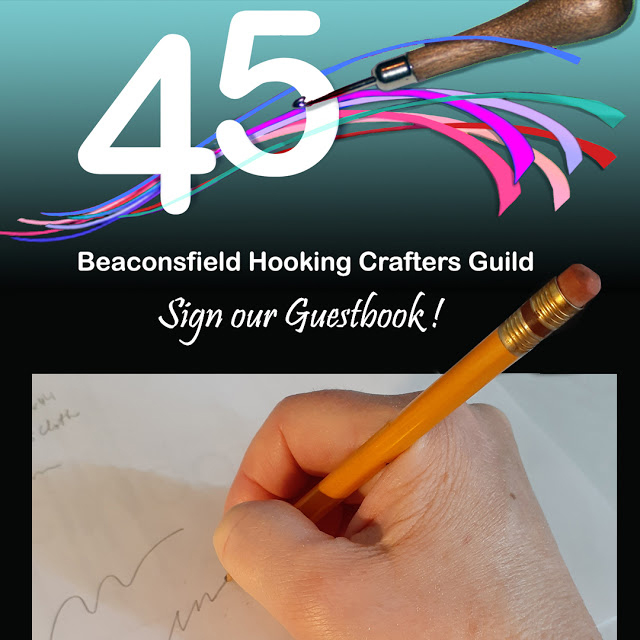 BHCG Virtual Celebration  / Guestbook Page  45th Anniversary Guestbook   Sign our Guestbook! You are invited to sign our guestbook and share a message. All messages will be reviewed before posting at the end of November. Your email is required but will not be published nor divulged to a third party. If you would like to receive a reply, please use our Contact Page. 45th Anniversary Guestbook - Illustration: Maria Romero NOVEMBER 65 Erin McKenna /Apohaqui, Canada/ Fabulous show! November 29 2020 - Website Guestbook 64 Marolyn Dodge Matthews / PEI Interesting! I enjoy your site November 29 2020 - Facebook 63 Marolyn Matthews / PEI Interesting! I draw my own designs. Looking for Scottish Burlap for sale? November 29 2020 - Website Guestbook 62 Joan Sullivan / Nottingham, NH USA Here's wishing you all a healthy, safe year ahead filled with beautiful wool, rug hooking, good friends and plenty of wine. Cheers from New Hampshire! Joan (jonalisa) @thescarlettpotter instagram November 29
Read more