Showing posts from March, 2015
Show all

Mug Rug Class Beginners Classes Create a Mug Rug Available dates:  April 25th and May 2nd, from 10 AM  to 2 PM  Mug Rug: $20 includes Mug and Materials Come along to this class to learn traditional rug hooking. A mug rug is the perfect small project for all ages. You will choose from a variety of mugs and design a Mug Rug (coaster) to match. Help will be on hand every step of the way. These classes are held at: Le Coin Artisanal                      454A Beaconsfield Blvd., Beaconsfield, QC For more information, please contact : ti.seymour@yahoo.com or call 514-247-9310
Read more

Padula* Party  *Padula - stylized representation of a flower. As one of the activities to mark the 40th anniversary of the guild, it was decided to give back to the community by making small flowers (padulas) to give to recipients of Meals on Wheels in West Island.  Members got together on Saturday, March 21st and Monday, March 23rd to make fabric flowers with fridge magnets.  The artistic talent of many of the guild members shone through as dozens of flowers came to life, with no two alike.  The activity proved to be a lot of fun and certainly brought some brightness to what we hope is the end of a very tough winter.  We hope in turn that this small gesture of a happy little flower will bring some joy to someone who receives it along with a meal. Making Padulas for Meals on Wheels
Read more Scrappy Rug Class Review_ By Jacqueline Tseng Judith Dallegret’s Scrappy Rug course, which consisted of 4 classes*, given at the Beaconsfield Hooking Crafters Guild in February, was marvelous!! Her course took us through the basics of cutting wool, how to hook, and blending colors. We were shown many examples of different types of borders to give us ideas, and were treated to a day of dying wool.  Judy gave us a great tip - put some poison (colors that stand out) into our rugs to give them a nice pop! Although a Scrappy Rug is perfect for using up our scraps, a lot of us couldn’t help but stock up on some more beautiful wool from Judith’s collection.  Judith’s class was very inspirational. Her carefree, open-minded attitude and support of individual tastes and talents were great incentives for some of us who are “not so sure”.   This way we enjoy what we are doing and we do more of it! * Feb 9 & 23 – March 9 & 16, with a make-up class on 23 March for anyone who
Read more 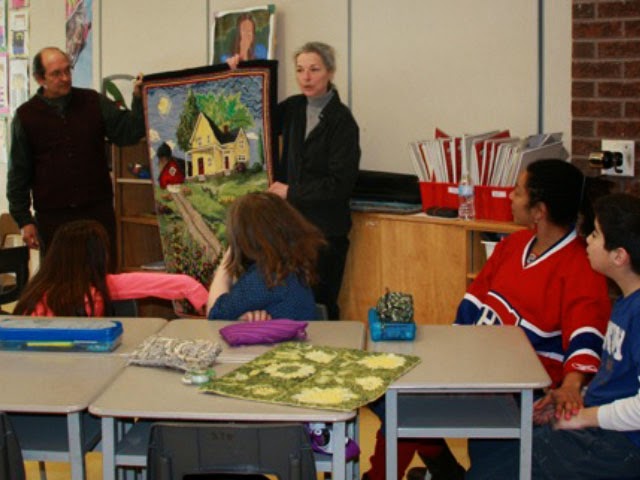 Teaching Rug Hooking to Grade 5 Students At the Sherwood Forest Elementary School By Ti Seymour Jacques Lepage and Isabelle Rollin at Sherwood Forest Elementary School As part of the Guild's 40th Anniversary it was decided that community projects would lead our celebrations. The first such project would be to introduce rug hooking to a local school and exhibit their pieces at our 40th Anniversary Exhibition to be held September 25-27, 2015. At the first session, the children were shown rugs and wall hangings that members of the Beaconsfield Hooking Crafters Guild had hooked. There was genuine interest and curiosity from the children - we had them captivated from the start!  Each child will be rug hooking a 5" square that will be sewn together to form a banner, which will eventually be displayed in the school’s entrance. Knowing that this piece is something they would not be taking home, some children were even planning a second project.  They drew their de
Read more

Montreal Gazette / The Guild in The News 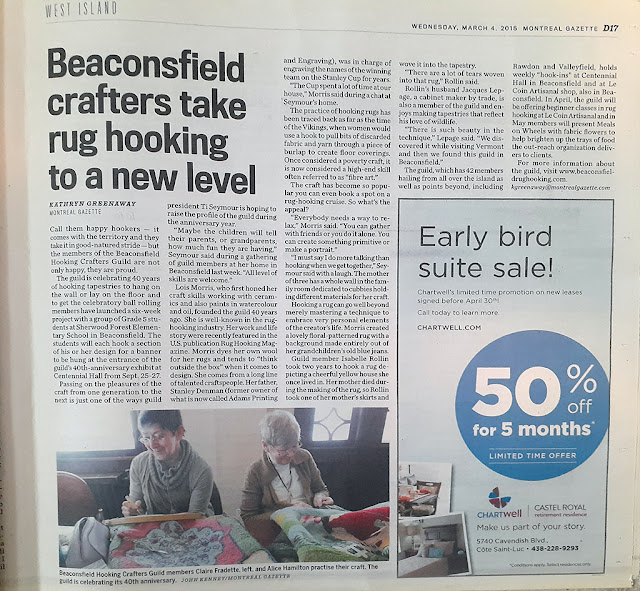 Montreal Gazette / The Guild In the News

Beaconsfield guild takes rug hooking to a whole new level    Kathryn Greenaway, Montreal Gazette   Published on: March 4, 2015 Last Updated: March 4, 2015 12:26 PM EST Call them happy hookers — it comes with the territory and they take it in good-natured stride — but the members of the Beaconsfield Hooking Crafters Guild are not only happy, they are proud. The guild is celebrating 40 years of hooking tapestries to hang on the wall or lay on the floor and to get the celebratory ball rolling members have launched a six-week project with a group of Grade 5 students at Sherwood Forest Elementary School in Beaconsfield. The students will each hook a section of his or her design for a banner to be hung at the entrance of the guild’s 40th-anniversary exhibit at Centennial Hall from Sept. 25-27. Passing on the pleasures of the craft from one generation to the next is just one of the ways guild president Ti Seymour is hoping to raise the profile of th
Read more 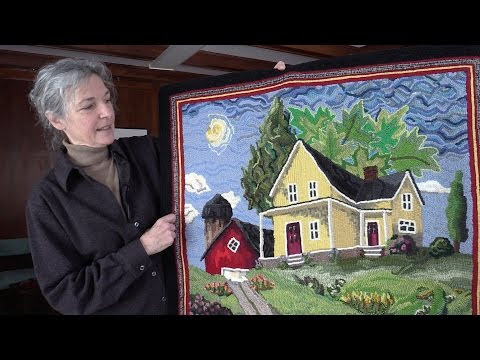 The Guild in The News_ The video done by John Kenney (Montreal Gazette) has been published on Youtube! See Isabelle Rollin, Lois Morris, Jacques Lepage and Alice Hamilton in action!    Beaconsfield Hooking Crafters Guild Turns 40_ March 3, 2015 Description: "Members of the Beaconsfield Hooking Crafters Guild show some of their creations Monday, March 2, 2015 in the Beaconsfield area of Montreal and founder Lois Morris speaks of how the guild has thrived as it celebrates 40 years of existence. (John Kenney / MONTREAL GAZETTE)"
Read more

The Guild / In the News 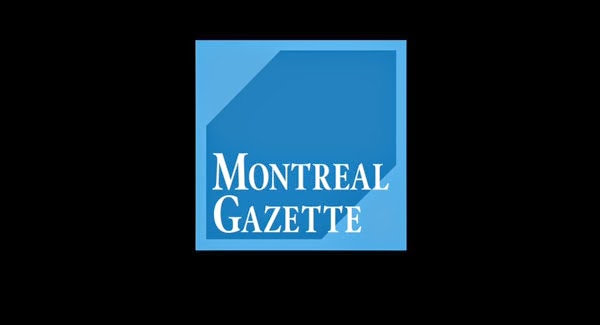 BHCG in the news! Monday, March 2, 2015 began with a regular monthly meeting followed by a flurry of activity. In anticipation of news coverage, many members had brought in rugs for show and tell. Normally these rugs would be photographed by guild president, Ti Seymour who was away on March break. In her absence, Bob Turnbull took photos of the rugs for the greeting card project.  At the same time, John Kenney, a Montreal Gazette photographer, was there to take pictures and videos in support of an article on the guild being written by West Island Gazette reporter, Kathryn Greenaway. It was wonderful to see the guild, its members and their rugs receiving well-deserved attention and media recognition! Brenda, Claire and Alice Isabelle, Lorayne and Sally Jacques' Work In Progress
Read more

New Emblem    By Maria Romero    For a few years now, the Executive has been thinking of creating a new emblem to represent the Guild at our biennial exhibitions and participation in the annual exhibitions of Area 1 branch Ontario Guild . The Executive fell in love with the 40th Anniversary logo and presented Maria Romero with the challenge of redesigning the logo as our guild's emblem. From among the many different versions suggested by Maria, the Executive chose this version, which you can appreciate in the attached image. The emblem will be hooked by Lois Morris. BHCG Emblem (2015)
Read more
More posts