Showing posts from November, 2014
Show all

Saturday 29th November – Christmas Themed Introduction to Rug Hooking Class
On this last day of BHCG’s Christmas Themed series of Introductory Rug Hooking Classes at Le Coin Artisanal, I had the pleasure of meeting three new participants, one of whom became a member of the Guild at the start of the class and by the end of the class one more had decided to join. Ann, Gilda and Mary decided to hook mug rugs (coasters). Well done ladies, they all looked lovely. Michael, who was also attending the class, put the finishing touches to his mug rug. Wanda also paid a visit to show us her Christmas tree, amazing progress in just one week!
Many thanks go to Cathy and Paola of Le Coin Artisanal who generously gave their energy to promoting the classes. At this time, a total of twelve people attended classes and three became members.
Ti Seymour, President Beaconsfield Hooking Crafters Guild

On Wednesday November 19, 2014 the City of Beaconsfield hosted an afternoon ‘Drop in’ for residents aged 55 years and up. The purpose was to inform and promote all the activities and services offered in the City both by the City and by Beaconsfield Associations. Members of Beaconsfield Hooking Crafters Guild appreciated the visitors who braved blustery weather to come out and take an interest in our rug hooking demonstration.
Read more

Guild Saturday Workshops at Le Coin Artisanal By Linda Henderson
The Saturday workshops at Le Coin Artisanal in BeaurepaireVillage have proved very popular and have generated real excitement about rug hooking.  By making a "mug rug" or  Christmas tree or Christmas angel, participants completely new to rug hooking enjoy the satisfaction of learning a craft and completing a project in a single session. The first two workshops (Nov. 1st and 15th) were well attended by men, women and a child and we hope for similar interest in the last session on Nov. 29th. The guild has taken great pleasure in introducing others to this wonderful craft and appreciates the new memberships that these sessions have generated. Kudos to the organizers!

Ti Seymour, Dawna Matthew and Linda Henderson travelled to Belleville, Ontario, enjoyed the hospitality of Karen and Kurt Kaiser and attended Karen's wide-cut workshop on Nov. 11, 2014.  We discovered the amazing versatility of half-inch strips of wool in creating both extraordinary works of art and functional mats.   With Karen's guidance, each of us has embarked on projects that are hooking up quickly and are a lot of fun.  The peaceful setting, the friendship enjoyed by the travelling companions and the newly acquired hooking skills all combined to make this trip a wonderful and therapeutic experience.
Karen Kaiser Website : //www.artworksbykarenkaiser.net/

Lois Morris / In The News 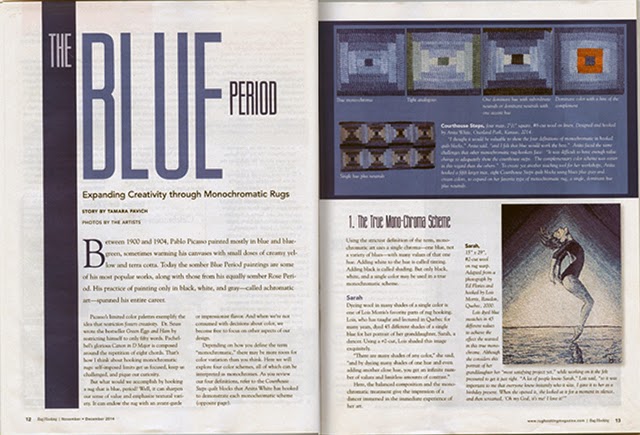 Using the strictest definition of the term, monochromatic art uses a single chroma - one blue, not a variety of blues, with many values of that one hue. Adding white to the hue is called tinting. Adding black is called shading. But only black, white and a single color may be used in a true monochromatic scheme.


Sarah
Dyeing wool in many shades of a single color is one of Lois Morris's favorite parts of rug hooking. Lois, who has taught and lectured in Quebec for many years, dyed 45 different shades of a single blue for her portrait of her granddaughter, Sarah, a dancer. Using a #2 cut, Lois shaded this image exquisitely.

"There are many shades of any color", she said, "and by dyeing many shades of one hue and even another close hue, you get an infinite number of values and limitless amounts of contrast."

A very busy day for BHCG.  Firstly the start of our Xmas Themed Classes which run over 3 dates in November - 1st, 15th and 29th.  Linda Henderson had successfully promoted the classes to the West Island Woodturners, which drew 2 turners to the first class.


Plus another participant signed up at LCA after seeing the mug rugs on display.  Both the turners finished their mug rugs and Mona took her 2 mugs and tray to finish at home.


BHCG wish to thank Fred - WIW turner, for providing the beautiful base/spindle which Dawna will be using for her tree.


Interestingly, Bob - WIW turner, brought along a piece his 96 year old mother had hooked some time ago for us all to appreciate.  After hooking his own coaster, he had a whole new appreciation and respect for his mothers craft.

Also in the room on another table sat members of the Guild who either worked on their own piece or a Christmas Tree design.  Some of whom took a…
Read more
More posts