Showing posts from September, 2008
Show all

- September 27, 2008
Beaconsfield Rug Hooking Exhibition    September 27th-28th, 2008 at Centennial Hall by Maureen Rowe Every two years, our Guild hosts an exhibition of our members’ most recent rugs. This year, we had 53 new pieces and there were approximately 100 visitors who signed our guest book. It was held on a Saturday and Sunday. On Sunday afternoon, Centennial Hall was part of Beaconsfield’s Culture Day whereby 11 different artists’ studios were on display including our own venue. Our pieces were arranged in two rooms on the first floor and two rooms on the second floor. Coffee and cookies were available while visitors could watch a rug hooking how-to video and/or play an interactive Sudoku game on Brenda Ticehurst’s rug. A Guild challenge had been offered to do a rose rug and/or a candle rug, so some of these were on display as well.
Location: Beaconsfield, QC, Canada
Read more

Lois Morris / In the News 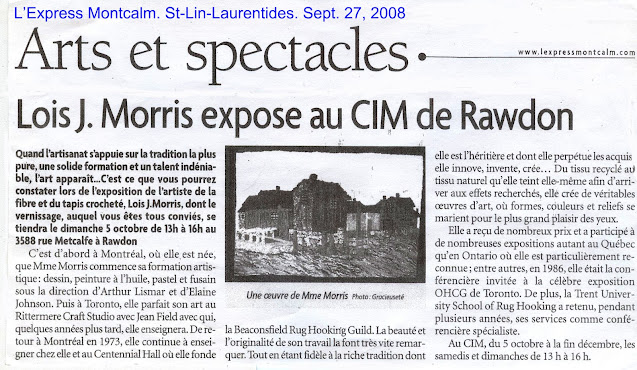